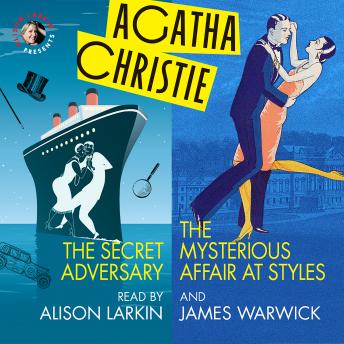 The Secret Adversary and The Mysterious Affair at Styles

In this delightful double-bill of Agatha Christie's first two novels, award winning narrator/comedienne Alison Larkin and TV star James Warwick bring The Secret Adversary and The Mysterious Affair at Styles to sparkling new life.
The Secret Adversary
It's 1919. Tommy and Tuppence are charming, broke, and in desperate need of work. They decide to set up Young Adventurers Ltd. - "willing to do anything, go anywhere". They are soon caught up in a dastardly plot to overthrow the British government.
The Mysterious Affair at Styles
The very first Hercule Poirot novel! When Emily Inglethorpe dies suspiciously after marrying a man twenty years her junior, her nephew, Captain Hastings, recruits his old friend Hercule Poirot to help in the investigation.

Secret Adversary and The Mysterious Affair at Styles