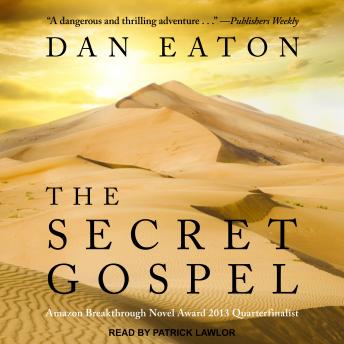 In 1958, a young Bible scholar stumbles upon a version of the Gospel of Mark far older than that recorded in the New Testament. Unfortunately, his discovery brings him nothing but vilification and accusations of forgery. Eventually, the Secret Gospel simply disappears.

Fifty-one years later, the scholar is dead, the victim of an apparent heart attack. However, evidence found in his room, coupled with a letter to Cairo-based journalist Alex Fisher, suggests murder-and hints that the missing gospel harbors deep secrets.

In Egypt's Western Desert, in the midst of a massive sandstorm, the fate of the Secret Gospel will be decided in blood.

As the hunt grows increasingly dangerous, it becomes apparent the lost manuscript has ties to both Nazi Germany and the Vatican's refusal to condemn the Holocaust. More is at stake than a lost text: the Secret Gospel could spell disaster for the Catholic Church-and change the balance of power in the Middle East.