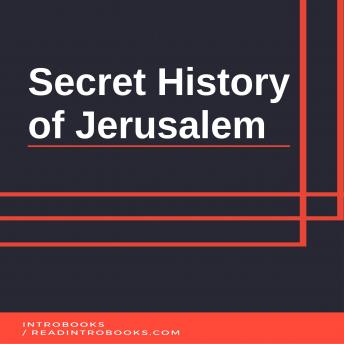 With the background of the Jerusalem being discussed, it is meant to enlighten the people about the secret history of Jerusalem and its hidden culture. The materials being presented is the summary of the philosophers and historians of the world. Much of the history of Jerusalem enlightens the readers about what all happened at the Temple Mount and the City of David after the era of the fall of the Roman Empire after the discovery of the lost temples in Jerusalem.


To begin the journey of the history of Jerusalem, the geography of Jerusalem is presented with the use of maps and visuals and the exact location of the places of historic and religious importance. One can be enlightened about the greatness of the place with the impressive display of the "Temple Mount" complex that is known by the Arabs as the Haram esh-Sharif also known as the Noble Enclosure with the display of the impressive walls. There is a comparison made about the prophecies and forecasts made by Jesus Christ who spoke about the destruction of the holy city of Jerusalem and the Temple.


There is the discussion made about the prophecy made by Jesus Christ about the destruction of both Jerusalem and the holy Temple wherein their foundations would be completely dug that would stand as a contrast to the impressiveness and the greatness of the ancient Herodian and the pre-Herodian stones that made up the walls of the Temple Mount. There are several mentions of the quotes from the very first centuries after the crucifixion of the Christ and the destruction of the holy city of Jerusalem where there are several witnesses of the prophesies of Jesus Christ that came to pass in a very precise manner that has been referred to as the true location of the Temple Mount.


There is an insight into the records of Josephus that can help in the identification of the "Temple Mount" that has been considered as not the true site of the temple but the actual site of the Roman camp of Fort Antonio. Then, there are the revelations of the symbolism of the Temple and the tabernacle in the holy city of Jerusalem.