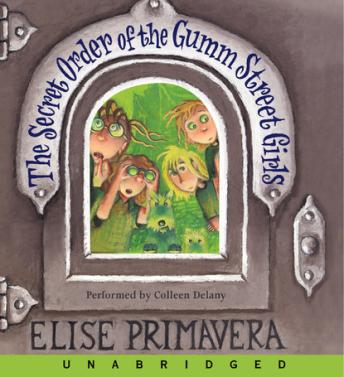 The Secret Order of the Gumm Street Girls

For seven years, bad luck has followed Ivy around like a dog on a leash. And now her mother has dragged her to live in a creepy old house on Gumm Street, where the weather may be perfect but the neighbors are worse than unfriendly.

Then a pair of mysterious ruby-red slippers leads Ivy on an unforgettable adventure with those very same neighbors—bookish Pru, stuck-up Cat, and wannable adventurer Franny. Together, they travel to the jaw-droppingly strange lands of Spoz, and Spudz, and Ooze, and battle the fashionably mad Cha-Cha Staccato, who bears a frightening resemblance to a certain wicked witch . . .

As hilarious as it is original, as inventive as it is true-to-life, The Secret Order of the Gumm Street Girls is an unforgettable take on girlhood, piano recitals, The Wizard of Oz, and the dependable everyday magic of family and friendship.

This title is due for release on September 26, 2006
We'll send you an email as soon as it is available!