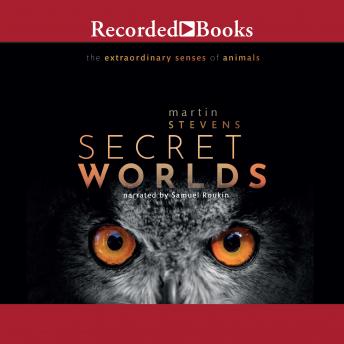 'What is it like to be a bat?', the philosopher Thomas Nagel famously asked concerning consciousness. For biologist Martin Stevens, the question forms the starting point of an exploration of animal senses. How indeed does a bat-or an owl, a bee, or a platypus-experience the world? Very differently to us humans, as we discover. Many animals experience a world far richer in sight, sound, and smell, and interact with each other in ways we simply don't pick up, and which continue to surprise researchers. Who would imagine that rats and mice sing complex songs while courting; or that the humble dung beetle relies on light from the Milky Way above for guidance as it carries its precious cargo away from competitors. The world must show so much more colour to many birds, with four types of cones in their eyes instead of our three, and the ability to see into the ultraviolet. And that's just considering the senses we share. What of those we have no inkling of-like the electric fields sensed by so many animals; or the magnetic maps used by migrating birds, and by sea turtles to find a current and return after many years to the shore where they hatched? In this enthralling account, we learn not only of the wonder of animal senses, but how they work and how scientists go about investigating them. And, throughout, we consider how these senses came to be. For evolution is at the root of it all, as Stevens explains. Senses arose to enable animals to catch prey, to hide,and to mate more effectively, usually honed through fierce competition and arms races with predators. The result, over millions of years, is a wondrous panoply of ways of experiencing the world, against which our own senses often pale into insignificance.