The Secrets of a Viscount: The Widows of the Aristocracy 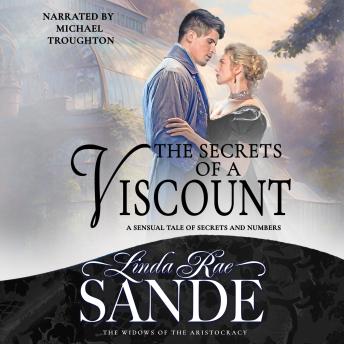 Nothing makes a man more lonely than his secrets. The same might be said for women.
Godfrey, Viscount Thorncastle, has a secret he'd rather not tell anyone, including the woman for whom he has held a candle for over twenty years. Elise Burroughs Batey, the widow of Lord Lancaster, has had enough of marriage, but pining for the chance at motherhood, she may just have to consider Godfrey's proposal.
If he can just get it right.
The man has some preconceived notions about his true love, none of which are true. But then, she has some of the same notions about him. And none of them are real!
Meanwhile, Adam Comber, Viscount Breckinridge, has finally decided it's time to marry-or perhaps a pending deadline has him motivated to find a bride. Why not the very first woman he spots from the bow window at White's? He may not be the best at mathematics, but he's pretty sure she's got his number.
As an arithmetic teacher and dance instructor at a finishing school, Diana Albright has a secret she'd rather the ton not learn, especially the rather handsome man who has just informed her she will be his bride. What a bounder! Of course his proposal is just a lark. Or is it? Does the viscount really intend to take her as his wife? Some numbers just don't quite add up in The Secrets of a Viscount.

Secrets of a Viscount: The Widows of the Aristocracy

This title is due for release on April 18, 2018
We'll send you an email as soon as it is available!