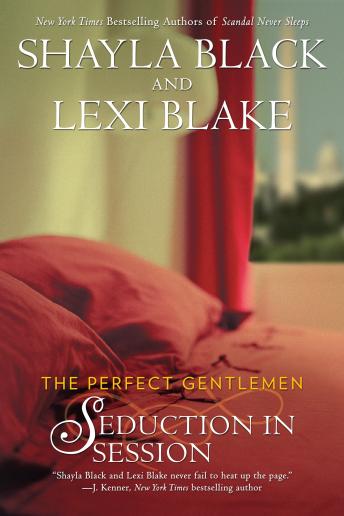 Seduction in Session: The Perfect Gentlemen

The second Perfect Gentlemen novel from the New York Times bestselling authors of the Masters of Ménage series.

Privileged, wealthy, and wild: they are the Perfect Gentlemen of Creighton Academy. But the threat of a scandal has one of them employing his most deceptive—and seductive—talents…

Recruited into the CIA at a young age, Connor Sparks knows how dirty the world can be. Only when he’s with his friends can he find some peace. So when an anonymous journalist threatens one of the Perfect Gentlemen, Connor vows to take down the person behind the computer, by whatever means necessary—even if it means posing as his target’s bodyguard.

Publishing a tabloid revealing Washington’s most subversive scandals has earned Lara Armstrong the ire of the political scene—and a slew of death threats.  To keep herself from ending up a headline, Lara hires a bodyguard, a man as handsome as he is lethal.

When the bullets start to fly, Lara is surprised to find herself in Connor’s arms. But as they begin to unravel a mystery that just might bring down the White House, Lara is devastated when she discovers Connor’s true identity—and finds herself at the mercy of forces who will stop at nothing to advance their deadly agenda.

Seduction in Session: The Perfect Gentlemen