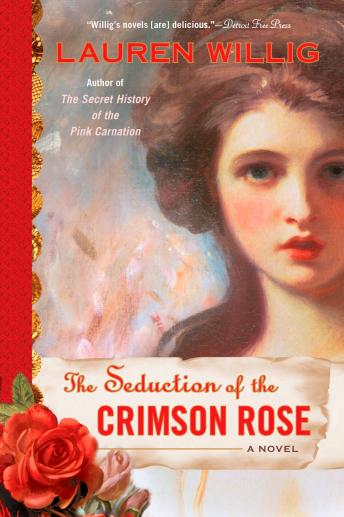 The Seduction of the Crimson Rose

Now in paperback - a novel that 'handily fulfills its promise of intrigue and romance.'
(Publishers Weekly)

Determined to secure another London season without assistance from her new brother-in-law, Mary Alsworthy accepts a secret assignment from Lord Vaughn on behalf of the Pink Carnation. She must infiltrate the ranks of the dreaded French spy, the Black Tulip, before he and his master can stage their planned invasion of England. Every spy has a weakness and for the Black Tulip that weakness is beautiful black-haired women?his ?petals? of the Tulip. A natural at the art of seduction, Mary easily catches the attention of the French spy, but Lord Vaughn never anticipated that his own heart would be caught as well. Fighting their growing attraction, impediments from their past, and, of course, the French, Mary and Vaughn find themselves lost in a treacherous garden of lies.

And as our modern-day heroine, Eloise Kelly, digs deeper into England?s Napoleonic-era espionage, she becomes even more entwined with Colin Selwick, the descendant of her spy subjects.

This title is due for release on January 31, 2008
We'll send you an email as soon as it is available!