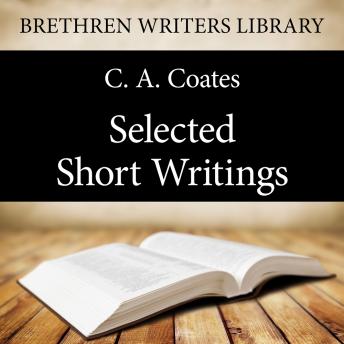 Written By: C. A. Coates

Three Selected Short Writings by CA Coates: Peace with GodThere are four things which hinder souls from having Peace: Coates uses four Old Testament pictures to show how every question in connection with these four things has been met and settled for the believer, for example, “Many be¬lievers in Jesus do not know that their sins are put away….actually carried out of God’s sight, and removed from before Him by being borne by Jesus”  Three scenes of JudgementIn this section ‘The Sacrifice of Isaac’, ‘The casting out of Ishmael’ and ‘The destruction of Sodom and Gomorrah’ are examined. As Coates says, ‘May the truths typified by these Three Scenes of Judgment have such a place in our souls that each one of us may have unclouded Peace and Joy, and be found in distinct Testimony for the One who is rejected by the world” What meanest Thou?
A short gospel message: “I would have you to consider carefully that indifference to the gospel is a sin of no ordinary kind ; it is pure and simple wickedness…..It is at an infinite cost that God has secured for Himself in righteousness the title of Saviour God. The Son has been given ; Jesus has died ; and the whole universe can see at the cross of Christ that God is neither indifferent to sin, nor to the need of His poor creature who has fallen under its  power…… Let me say, then, very briefly, that through a crucified, risen, and glorified Saviour—the Son of God, Jesus Christ our Lord —God is proclaiming the forgiveness of sins, and eternal salvation.”
A word about the author: Charles Andrew Coates (1862 -1945) was born in Bradford, England and died in Teignmouth, Devon.
Saved when a young man, he never enjoyed robust health and the many occasions when he was laid aside through illness were put to good use in prayerful meditation and the study of Holy Scripture.
Because of his ill health Coates could not go about teaching and preaching, but he could not be idle for his Lord, so instead he produced many tracts and books, and he also used his poetical ability to compose a number of poems and hymns.
This book is part of the Brethren Writers Library series. These books go forth with the purpose of introducing the listener to the writings of men who were gifted of God as teachers ‘for the perfecting of the saints, for the work of the ministry, for the edifying of the body of Christ’. Further writings of CA Coates are available from christiandoctrineandgospelpublishing.org Words by the Wayside, 2015.

This title is due for release on March 9, 2015
We'll send you an email as soon as it is available!