Selections from the Writings of Cicero 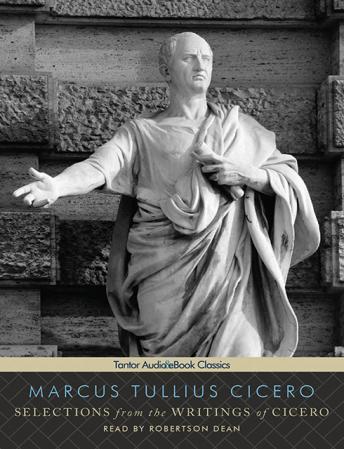 Roman statesman and philosopher Marcus Tullius Cicero wrote on a wide range of subjects, from Greek philosophy to moral duty to friendship. Though he considered philosophy secondary to politics and often used his writings for explicit political ends, his work has nevertheless been widely read for over two thousand years and has influenced everything from the culture of the Renaissance to the ideals of the founding fathers of the United States.

This edition contains three of Cicero's best-known works. In 'On Friendship,' from his Treatises on Friendship and Old Age, Cicero examines the nature of true friendship, which he considers to be based on virtue and dependent upon honesty, truth, and trust. In De Officiis, or 'On Duties,' written as a letter to his son, Cicero shares his beliefs about the potential conflicts between moral obligation and expedience. Finally, 'Scipio's Dream,' the sixth book of On the Republic, describes a fictional dream vision of the Roman general Scipio Aemilianus, set two years before the destruction of Carthage in 146 BC.

Selections from the Writings of Cicero