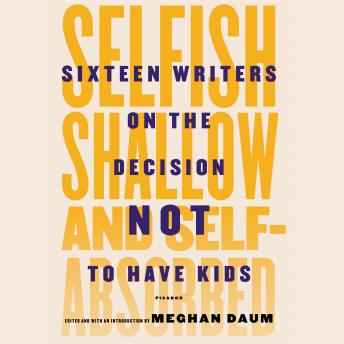 Selfish, Shallow, and Self-absorbed: Sixteen Writers on the Decision Not to Have Kids

One of the main topics of cultural conversation during the last decade was the supposed 'fertility crisis,' and whether modern women could figure out a way to have it all-a successful, demanding career and the required 2.3 children-before their biological clock stopped ticking. Now, however, conversation has turned to whether it's necessary to have it all (see Anne-Marie Slaughter) or, perhaps more controversial, whether children are really a requirement for a fulfilling life. The idea that some women and men prefer not to have children is often met with sharp criticism and incredulity by the public and mainstream media.
In this provocative and controversial collection of essays curated by writer Meghan Daum, sixteen acclaimed writers explain why they have chosen to eschew parenthood. Contributors include Lionel Shriver, Sigrid Nunez, Kate Christiensen, Elliott Holt, Geoff Dyer, and Tim Kreider, among others, who will give a unique perspective on the overwhelming cultural pressure of parenthood.
Selfish, Shallow, and Self-Absorbed makes a thoughtful and passionate case for why parenthood is not the only path in life, taking our parent-centric, kid-fixated, baby-bump-patrolling culture to task in the process. What emerges is a more nuanced, diverse view of what it means to live a full, satisfying life.

Selfish, Shallow, and Self-absorbed: Sixteen Writers on the Decision Not to Have Kids