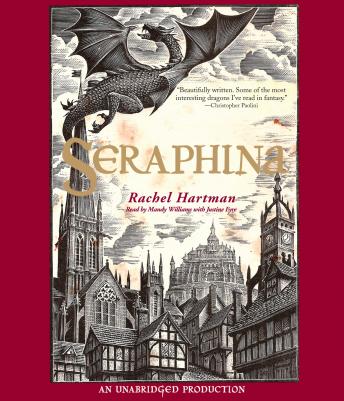 Lyrical, imaginative, and wholly original, this New York Times bestseller with 8 starred reviews is not to be missed.  Rachel Hartman’s award-winning debut will have you looking at dragons as you’ve never imagined them before…

In the kingdom of Goredd, dragons and humans live and work side by side – while below the surface, tensions and hostility simmer.

The newest member of the royal court, a uniquely gifted musician named Seraphina, holds a deep secret of her own. One that she guards with all of her being.

When a member of the royal family is brutally murdered, Seraphina is drawn into the investigation alongside the dangerously perceptive—and dashing—Prince Lucien. But as the two uncover a sinister plot to destroy the wavering peace of the kingdom, Seraphina’s struggle to protect her secret becomes increasingly difficult… while its discovery could mean her very life.

'Will appeal to both fans of Christopher Paolini’s Eragon series and Robin McKinley’s The Hero and the Crown.' —Entertainment Weekly

Loved this book, I was absorbed in the world and completely captured by Seraphina the entire time. The narrative was perfect and really portrayed the various characters and their voices splendidly. If you want a wonderful book to listen to, then look no further, this is the audiobook for you.

Unbelievable. Not only solid narration, but also beautiful and tactful writing. If you have loved books like Sabriel and Fire then you'll love this too. You'll love it if you have no clue what those are anyway.

I love this book and its sequel. The story is truly original and incredibly interesting. Seraphina is a smart and relatable heroine. I loved the new take on dragons and how it borrows from ancient beliefs that dragons are logical, rational beings, not strictly monsters. This story and its sequel, as a pair, are transcendental wisdom disguised as fantasy fiction. Brilliant.