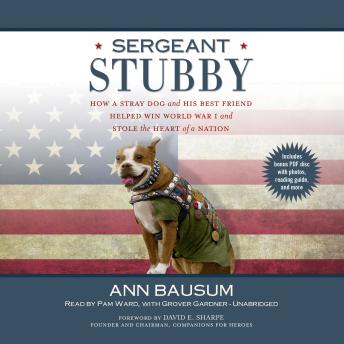 Told for the first time, here is the story of a stray dog who eventually became affectionately known as Sergeant Stubby, the most famous war dog of World War I. Beloved award-winning children's author Ann Bausum brings her friendly writing style and in-depth research to her first book for adults.

Stubby's story begins in 1917 when America is about to enter the war. A stray dog befriends Private J. Robert 'Bob' Conroy at the Connecticut National Guard camp at Yale University, and the two become inseparable, eventually crossing an ocean and going to war together. What follows is an epic tale of how man's best friend becomes an invaluable soldier on the front lines and in the trenches, a decorated war hero, and an inspiration to a country long after the troops returned home.