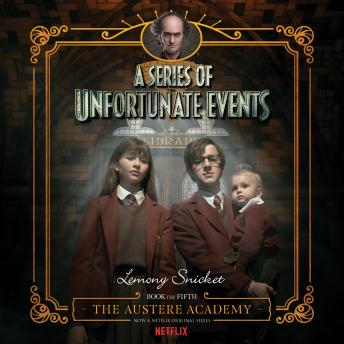 The Series of Unfortunate Events #5: The Austere Academy

#5 of A Series of Unfortunate Events

As the three Baudelaire orphans warily approach their new home Prufrock Preparatory School, they can't help but notice the enormous stone arch bearing the school's motto Memento Mori or 'Remember you will die.'

This is not a cheerful greeting and certainly marks an inauspicious beginning to a very bleak story just as we have come to expect from Lemony Snicket's A Series of Unfortunate Events, the deliciously morbid set of books that began with The Bad Beginning and only got worse.

Once again, we enjoyed the book, but it was hard to continue listening after each character because the readers voice was ridiculously horribly. The volume was extremely low and there were times when I nearly told my son to get read the book instead of listening.

It was a great book and I can't wait to read the next one. The narrator is much better than some others I have listened to as well.

Although I enjoyed the story I have to agree with the other reviews and say that the reader is AWFUL!!!

While my entire family-- from grandchildren to granddad-- love the series, none of us could listen to this book because of the nerve grating, irritating, ear-drum piercing voice of the writer. If I thought "it couldn't be as bad as book 4," I was wrong. Thank goodness the next book is read by Tim Curry. Now maybe I'll know what's going on with these children, because if I had to listen to the writer on each book, I couldn't care less.

Full disclosure: I was unable to tolerate more than about ten minutes of this audio book. I make no apologies for my opinions formed in that brief period. Authors are not always the best readers. Mr. Snicket (nom de plume of Daniel Handler) should stick with the former and leave the latter to someone else. As I read the text originally, I heard Tim Curry’s voice in my head. Mr. Handler sounds almost, but not quite, entirely unlike Mr. Curry, or Jude Law, who plays the voice of Mr. Snicket in the movie version. When I heard interviews with Mr. Handler on National Public Radio’s Fresh Air, I enjoyed the conversation, and truly enjoyed the texts I read, even to the point of reading them aloud at people I knew. This can be thoroughly enjoyable and I highly recommend it. I cannot, however, recommend this audio book. The audio level was fairly low, and Mr. Handler’s voice is not a strong one. His tone is rather flat and there is little of the verbal eyebrow arching and dramatic confidences the manuscript cries out for. Add to this uneven sound levels for character voices, and I found I could not overcome my aversion to the performer to hear the work performed. While I have and will continue to enjoy the written versions of A Series of Unfortunate Events, as long as Lemony Snicket is listed as reader, I will follow the advice on the package and disks and not listen.