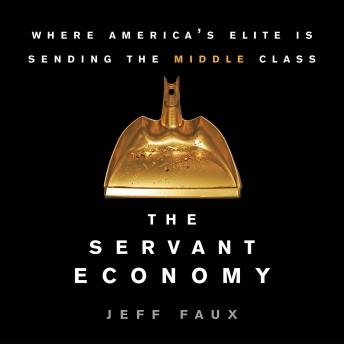 The Servant Economy: Where America's Elite is Sending the Middle Class

America's political and economic elite spent so long making such terrible decisions that they caused the collapse of 2008. So how can they continue down the same road? The simple answer that no one in charge wants to publicly acknowledge is that things are still pretty great for the people who run America. It was an accident of history, Jeff Faux explains, that after World War II the U.S. could afford a prosperous middle class, a dominant military, and a booming economic elite at the same time. For the past three decades, all three have been competing, with the middle class always losing. Soon the military will decline as well.Faux's last book, The Global Class War, sold over 20,000 copies by correctly predicting the permanent decline of our debt-burdened middle class at the hands of our off-shoring executives, out-of-control financiers, and their friends in Washington. Since his last book, Faux is repeatedly asked what either party will do to face these mounting crises. After looking over actual policies, proposed plans, non-partisan reports, and think-tank papers, his astonishing conclusion is that they'll just do more of the same.

Servant Economy: Where America's Elite is Sending the Middle Class