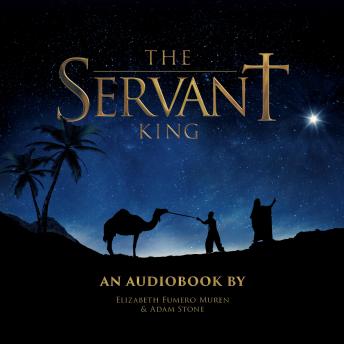 The Servant King: From The Heart of Christmas Musical

The Servant King audiobook tells the legendary story about the Persian prince Zargon, and his humble servant Mustafa. They set out on an arduous quest from their homeland in the east, in search for the coming king to be born in Bethlehem in Judea, just as the stars had heralded and the old prophecies foretold. Zargon's wise friends had traveled before him, as he chose to stay behind a bit in Persia, to receive his firstborn son. They brought their magnificent gifts and valuable treasures to bestow upon the newborn king, and prepared for a majestic encounter as they set out through the desert.

As Zargon and Mustafa soon realized, the journey would not be easy. Upon finally arriving to Bethlehem, neither their three friends nor the newborn Jewish king were anywhere to be found. In stead they stumbled upon dangers and sickness and needs, and opportunities to give, that would change their lives forever. And ultimately, as they had lost all treasures and gifts for the king, they also discovered that true wealth and value, was found through having empty hands, but an abundant and sharing heart.

The absolute best Christmas story ever