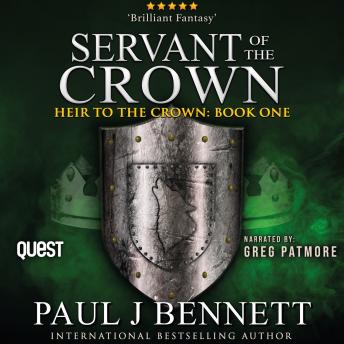 Servant of the Crown: Heir to the Crown Book 1

An old warrior, too stubborn to die.
A royal heir, hidden at birth.
Can they save a realm on the brink of war?

Tragedy tears Gerald's world apart and only his unwavering loyalty to the Baron of Bodden saves him. After serving as a soldier for years, a single act of self-sacrifice thrusts his future into the world of politics. Cut off from all he knows, he becomes no more than a pawn to those in command.

Banished with little more than the clothes on his back, he seeks a new purpose, for what is a warrior who has nothing left to fight for?

A fateful meeting with another lost soul unmasks a shocking secret, compelling him to take up the mantle of guardian. Bandits, the Black Hand, and even the king, he battles them all for the future of the realm.

Memories of the past, secrets that shape the future; his adventure is only the beginning.

Servant of the Crown is the first book in the medieval Heir to the Crown fantasy series. If you like gripping fight scenes, compelling characters, and a captivating story, then you will love Paul J Bennett's tale of a warrior who refuses to retreat.

Pick up your copy of Servant of the Crown, and discover the realm of Merceria today!

I just finished reading this book today and i have to say my first adventure through the land of Merseria has been amazing. Paul J Bennett has crafted an amazing world and written every character in that world with equal importance. Each of his characters from the simplest of towns folk to the richest of nobles and even a certain royal dog has an equally important part in his story and i really enjoyed reading about the relationships between each of them and the suspense of what was going to happen next. I loved the Narration as well Greg Patmore is fantastic and does a great job of bringing each of the characters to life through his excellent voice work. If you enjoy a well written fantasy with some mystery and enchantment thrown in i highly recommend this as I could not put it down. I am definitely looking forward to continuing my adventures in Merceria as i found this book easy to fallow but hard to put down and i can't wait to see how the story and it's main characters develop over time.