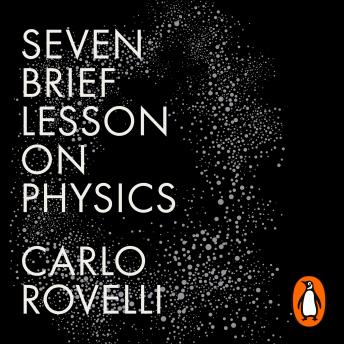 These seven 'short lessons' guide us, with admirable clarity, through the scientific revolution that shook physics in the twentieth century and still continues to shake us today. In this short, playful, entertaining and mind-bending introduction to modern physics, Rovelli explains Einstein's theory of general relativity, quantum mechanics, black holes, the complex architecture of the universe, elementary particles, gravity, and the nature of the mind. In under one hundred pages, readers will understand the most transformative scientific discoveries of the twentieth century. Not since Richard Feynman's celebrated best-seller Six Easy Pieces has physics been so vividly, intelligently and entertainingly revealed.

Carlo Rovelli is an eminent physicist with an extraordinary ability to write about complex topics in a lucid, clear prose. His book was top of the bestseller charts in Italy for months and has sold over 200,000 copies since publication in November. He is the head of the Équipe de Gravité Quantique at the Theoretical Physics Department of Aix-Marseille University. It has sold in over a dozen languages.

A wonderful and simple as well as deeply philosophical, tour through basic notions of modern physics, accessible to everyone. I haven't studied physics since high school yet I have followed with pleasure the author's thread of thought till the end.