Seven Roads to Hell: A Screaming Eagle at Bastogne 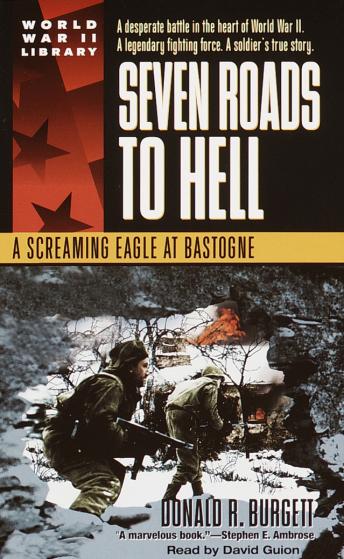 In December 1944, Hitler launched a desperate massive counterstrike at the Allies, with thirty-eight German divisions slamming through American lines. Then the 101st Airborne was thrown into the fight. Fresh from seventy-two brutal days of combat in Holland, with little food and ammunition, the Screaming Eagles struck back-and stunned the German forces. Then the real battle for the town of Bastogne-and its seven key roads-began...

This powerful, action-packed memoir puts us in the middle of the legendary fighting force known as the Screaming Eagles. Along the way, Donald R. Burgett, just nineteen years old at the time of the battle, vividly captures some of the most horrific action of World War II. From point-blank tank assaults to hand-to-hand combat, Private Burgett and his cold, hungry, and wounded fellow paratroopers stood against an overwhelming enemy force-and won the battle that secured victory for the Allies in World War II.

Seven Roads to Hell: A Screaming Eagle at Bastogne

This title is due for release on September 25, 2001
We'll send you an email as soon as it is available!