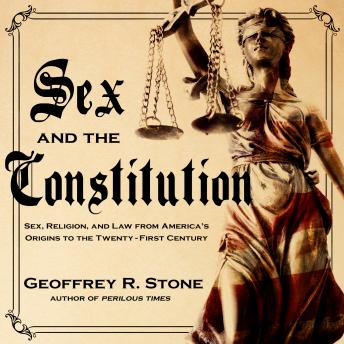 Sex and the Constitution: Sex, Religion, and Law from America's Origins to the Twenty-First Century

Renowned constitutional scholar Geoffrey R. Stone traces the evolution of legal and moral codes that have attempted to legislate sexual behavior from the ancient world to America's earliest days to today's fractious political climate. Stone crafts a remarkable, even thrilling narrative in which he shows how agitators, moralists, legislators, and especially the justices of the Supreme Court have historically navigated issues as explosive and divisive as abortion, homosexuality, pornography, and contraception. Overturning a raft of contemporary shibboleths, Stone reveals that at the time the Constitution was adopted there were no laws against obscenity and no laws against abortion before the midpoint of pregnancy. A pageant of historical characters?including Voltaire, Thomas Jefferson, Anthony Comstock, Margaret Sanger, J. Edgar Hoover, Phyllis Schlafly, and Justice Anthony Kennedy?enlivens this landmark work, which dramatically reveals how our laws about sex, religion, and morality reflect the paradoxes and cultural schisms that have cleaved our nation from its founding.