Sexton Blake Lilies For The Ladies & Other Stories 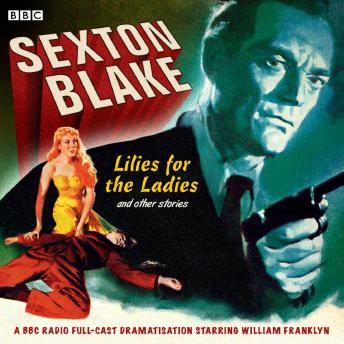 ‘The history of crime detection has produced no more famous name than that of Sexton Blake’William Franklyn stars as paperback hero Sexton Blake, with David Gregory as his assistant Tinker, in four original BBC Radio dramatisations from 1967. Lost from the BBC archives for over 40 years, these rediscovered episodes are presented for the very first time.‘Lilies for the Ladies’: In the first episode of the series, Blake investigates the unexplained murders of four wealthy society women. ‘The Sin-Eater’: An old friend of Blake’s receives a series of cryptic messages written on playing cards. Featuring James Beck (Private Walker, Dad’s Army).‘Bluebeard’s Keys’: Blake is sent a mysterious key in the post. The attached note reads: ‘This is Bluebeard’s first key.’Plus a special bonus episode - ‘Murder on the Portsmouth Road’. In one of Britain’s earliest surviving drama recordings (from 1930), Arthur Wontner stars as Sexton Blake, tracking down a killer on a stormy night.WARNING: Due to the archive and off-air nature of some of the source material, the sound quality may vary. Also, some of the language on this recording reflects the era in which it was first recorded.

Sexton Blake Lilies For The Ladies & Other Stories