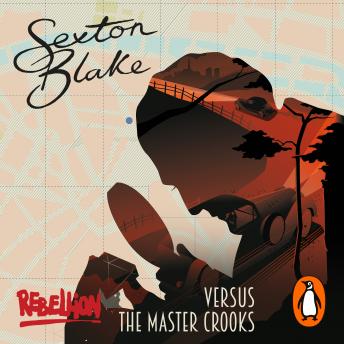 Sexton Blake Versus the Master Crooks

A new breed of villain has risen, possessed of extraordinary intellect and violence. Only the brilliant mind and courage of Sexton Blake, scourge of the criminal world, can stop them, in these three classic stories, collected together in one volume for the first time.
From the streets of London to the catacombs of Paris, join Blake as he pits his wits against banks robbers, impostors and kidnappers, duels with swords, and pursues his foes by any means necessary.

THE CASE OF THE MAN IN MOTLEY by Anthony Skene (George N. Philips) (1919).
Sexton Blake literally crosses swords with the most stylish of his enemies; engages in a car chase; discovers a murdered clown; fights on the brink of an incinerator; and recovers a stolen diamond.

PRINCE PRETENCE by Lewis Jackson (Jack Lewis) (1921)
A labour leader is abducted and impersonated by Leon Kestrel; the French lottery is won; Sexton Blake's efforts are sabotaged and he is arrested; an imposter is exposed; a master crook is caught; a grotesque dwarf is visited; Tinker is kidnapped for ransom and threatened with being walled up in the Paris catacombs; Blake comes to the rescue; and the villains, though defeated, escape.

THE WONDER MAN'S CHALLENGE by Edwy Searles Brooks (1921)
Waldo the Wonder-Man robs a bank, climbs a sheer wall, walks a tightrope, steals a biplane and a necklace, and challenges Sexton Blake to catch him. Blake puts Pedro on the trail, spots a deception, and has a confrontation in a pub. Tinker picks a pocket. Waldo climbs up a chimney, swings onto a train, and flees defeated.

Sexton Blake Versus the Master Crooks