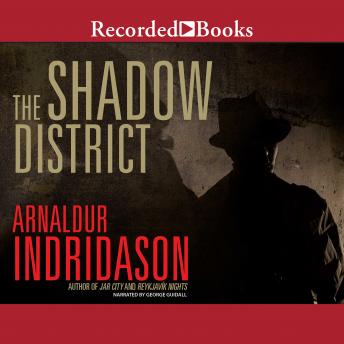 The Shadow District is the stunning first book in the compelling new series from award-winning Icelandic author Arnaldur Indridason, whom reviewers are calling 'a master.' A 90-year-old man is found dead in his bed, smothered with his own pillow. On his desk the police find newspaper cuttings about a murder case dating from the Second World War, when a young woman was found strangled behind Reykjavik's National Theatre. Konrad, a former detective, is bored with retirement and remembers the crime. He grew up in 'the shadow district', a rough neighborhood bordered by the National Theatre. Why would someone be interested in that crime now? He starts his own unofficial enquiry. Alternating between Konrad's investigation and the original police inquiry, we discover that two girls had been attacked in oddly similar circumstances. Did the police arrest the wrong man? How are these cases linked across the decades? And who is the old man? A deeply compassionate story of old crimes and their consequences, The Shadow District is the first in a thrilling new series of novels by the worldwide bestselling author Arnaldur Indridason.