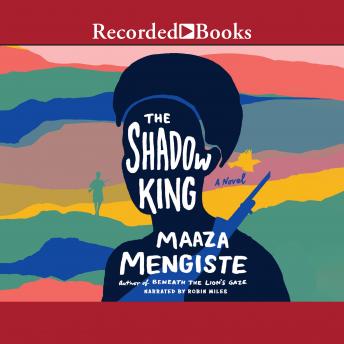 'A brilliant novel, lyrically lifting history towards myth. It's also compulsively readable. I devoured it in two days.' ? Salman Rushdie In 1935, orphaned servant Hirut struggles to adapt to her new household as Ethiopia faces Mussolini's looming invasion. As the battles begin in earnest, Hirut and other women must care for the wounded. But when Emperor Haile Selassie goes into exile and Ethiopia is about to lose hope, Hirut helps to disguise a gentle peasant as the emperor to keep the fight alive. She becomes his guard, inspiring women to join the war against fascism. In this extraordinary, beautifully told epic, Hirut overcomes rape, violence, and imprisonment, finding the strength to fight for her country's freedom and her own. Maaza Mengiste breathes life into complicated characters on both sides of the battle line, shaping a searing story of ordinary women and the advanced army they courageously opposed. Set against the first real conflict of World War II, The Shadow King is a heartrending, indelible exploration of what it means to be a woman at war.

This is a difficult book to appraise. I think that the author is extremely gifted and one can tell that the story she tells is very personal to her - there is a lot of passion in it. At the same time the story is partly a detailed account of war and all its horrors and I just did not feel in the mood for it with all that is going on at present, which is not a fault of the author's - she does it so well that it felt very depressing. The author's language is beautiful and she has based her story on a true situation - who knew that Italy had tried to colonize Ethiopia less than a century ago? It is fascinating in that respect, and the fact that the Ethiopians were so ill-equipped to deal with the invasion but beat them out for a second time, and that the women of the country joined in as soldiers. Given her writing, I do understand why this book was awarded the Booker prize this year. The narrator is very good though I wish that she had at least tried to "Italianize" her accent when speaking the parts of the Italians, I found it a bit confusing at times.

This is one of the most interesting books I have read in a long time. I knew nothing about the women freedom fighters in Ethiopia fighting along side their men. They were fighting the Italians who wanted Ethiopia as a colony. An amazing story of heroism. The readers is the best yet!

This book was very difficult to get through. I do not understand all the HYPE associated with it. I gave it an average rating, because it is an average book. It took FOREVER to get to the end.

It didn’t keep my interest.

Narrator is SPECTACULAR. Her ability to change voice accents is among the best I've listened to. Book very well written telling a story unknown to many. I am honored to now know the story.