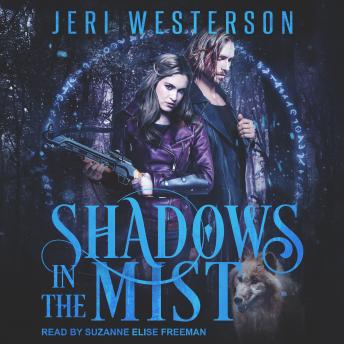 Shadows in the Mist: Booke Three in the Booke of the Hidden Series

Small-town tea shop proprietor Kylie Strange already has a lot on her plate. The last thing she needs is more trouble to spring up from the mystical Booke of the Hidden.

Keeping one step ahead of a scheming demon, supernatural assassins, and Baphomet-an angry god hellbent on stealing the Booke-it's all more than enough for one person to handle. And that's without mentioning her competing affections for the demon Erasmus Dark and the handsome, human Sheriff Ed.

But soon enough, Kylie and her coven hear whispers of new disturbances in Moody Bog. Strange creatures have been stalking the townsfolk and rumors of violent encounters confirm their deadly intent. Worst of all, the Booke of the Hidden is not to blame, and no one is sure what is.

Kylie and her coven of Wiccans need to prioritize. Which is worse? The mysterious and lethal creatures or Baphomet, who-if he gets his way-will unleash Hell upon Moody Bog . . . and beyond.

Shadows in the Mist: Booke Three in the Booke of the Hidden Series