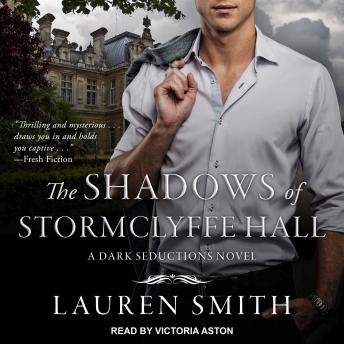 The Shadows of Stormclyffe Hall

To defeat a dark evil, they must face his family's past . . .

Bastian Carlisle, the Earl of Weymouth, doesn't believe in ghosts. Even though tragedy and mysterious hauntings have driven his family away from his ancestral home, Stormclyffe Hall, he is determined to restore the castle to its former glory. His plans are disrupted when a stubborn American shows up on his doorstep hoping to pry into his family's tragic history.

Jane Seyton, an American graduate student, is convinced there's more to the tragedy of Stormclyffe Hall than history claims. Ever the scholar, she is determined to discover the truth, even if it means putting up with the arrogant, yet sexy, Bastian.

Although Bastian wants nothing to do with the pushy American, it soon becomes clear that something evil is in the house-and that something is targeting both Jane and Bastian. The two must join forces to purge the ghosts of Stormclyffe Hall once and for all-even as they try to fight a physical attraction between them that grows more and more impossible to deny.