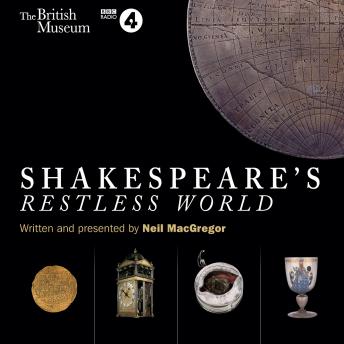 What was life like for Shakespeare's first audiences? In a time of political and religious unrest and economic expansion, how did Elizabethan play-goers make sense of their changing world? What did the plays mean to the public when they were first performed? In this fascinating series, Neil MacGregor attempts to answer these questions by examining twenty objects from that turbulent period. There are grand objects such as a communion chalice, a Venetian goblet, and Dr Dee's mirror, as well as everyday items such as a theatregoer's fork and an apprentice's cap. From Drake's circumnavigation medal to an eye relic, he uses these objects to explore the issues that shaped Shakespeare's plays, and considers what they reveal about the concerns and beliefs of Shakespearean England. Speaking to scholars, historians and experts, he discusses the topics raised - everything from exploration and discovery to violence, entertainment, and the plague.