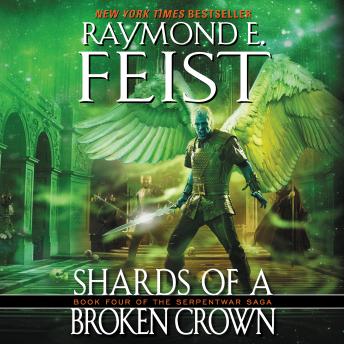 Shards of a Broken Crown: Book Four of the Serpentwar Saga

The terrible Emerald Queen is vanquished…but the war in Midkemia is not yet won, as the remarkable Raymond E. Feist concludes his magnificent Serpentwar Saga with Shards of a Broken Crown—a spellbinding tale of magic, conflict, and treachery that sees the rise of a new threat from the ashes of defeat, an evil poised to strike mercilessly at realm triumphant but weakened by war. This is epic fantasy adventure at its finest—a classic that stands tall alongside the best works of Terry Goodkind, George R. R. Martin, Terry Brooks and other acclaimed fantasists. Feist once again works his breathtaking magic in Shards of a Broken Crown, and, as always, he “brings a new world alive” (Portland Oregonian).

Shards of a Broken Crown: Book Four of the Serpentwar Saga