Sharing a Mate: A Kindred Tales M/F/M Novel (Brides of the Kindred) 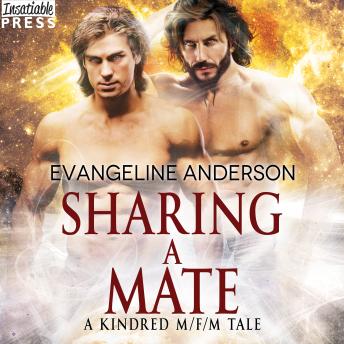 **This is a M/F/M romance with a tiny bit of M/M in the plot*A Beast Kindred who will not share a femaleA Blood Kindred who feels the sameA woman forced to turn to both of them for helpWill Bron and Sorin learn to share Kayla?Or will Sharing a Mate tear the three of them apart?Dr. Kayla Smith is a strong, independent woman with several prestigious degrees in Xenobiology and Chemistry. She lives and works on the Mother Ship and shares a lab with her two best friends, Dr. Bron--a huge Beast Kindred who is also a decorated microbiologist and Dr. Sorin, a Blood Kindred and award-winning virologist. The three of them work and play together but Kayla is afraid to act on her feelings for either Kindred because she knows that picking one means losing the other.Then comes the Great Needing.When Xi-46, a virulent aphrodisiac, is introduced into the Kindred Mother Ship through the air vents, Kayla is one of the women affected. Her desperate need can only be slaked with the help of a male and she gets help from both of her friends. Afterwards, they expect her to choose between them...but Kayla can't--she loves them both.Now they must go on a desperate mission to find the source of Xi-46 and try to create an antidote. But the further they go, the more Kayla realizes she needs both men in her life...and they need each other as well, though neither one wants to admit it.Can Bron and Sorin learn to share a mate?Can Kayla convince them that the three of them belong together?Or will the horrors they suffer at the house of Mother Pain tear them apart?Read Sharing a Mate to find out...***Author's Note and WARNING:There is a tiny bit of M/M action in this novel, which isn't usual for my Kindred menage books. My intentions in writing M/M in this the book wasn't to add gratuitous sex but rather to show a true three-way relationship in which all the characters love and respect each other equally. I hope you will enjoy it--there is plenty of M/F/M action too, which I think will make you happy if you like menage romance. Also, if you'd like to see the images which inspired this book, by the insanely talented artist, aenaluck, check my Inspiration for Sharing a Mate Pinterest Board.Hugs and Happy Reading! Evangeline

Sharing a Mate: A Kindred Tales M/F/M Novel (Brides of the Kindred)