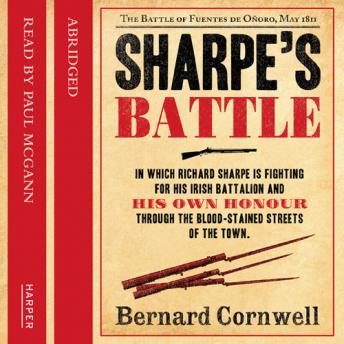 Sharpe’s Battle: The Battle of Fuentes de Oñoro, May 1811

#12 of The Sharpe Series

The thirteenth novel in the popular Sharpe series. Once more Sharpe’s career is on the line, following a disastrous attack by an elite French unit. To save his honour Sharpe must lead his men to glory in one of the bitterest battles of the Peninsular War.

In the spring of 1811, while quartered in the crumbling Portuguese fort of San Isidro, Richard Sharpe and his men are attacked by an elite French unit commanded by the formidable Brigadier Loup, and suffer heavy losses. Sharpe has already clashed once with Loup, and the Frenchman has sworn to have his revenge.

After the attack, Sharpe is faced with the ruin of his career and reputation, as the army’s high command tries to blame him for the disaster. With thousands of French troops massing at a tiny village nearby, Sharpe’s only hope is to redeem himself on the battlefield. To save his honour, Sharpe must lead his men to glory in the narrow streets of Fuentes de Oñoro.

The Complete Sharpe Collection
with a new introduction by the author