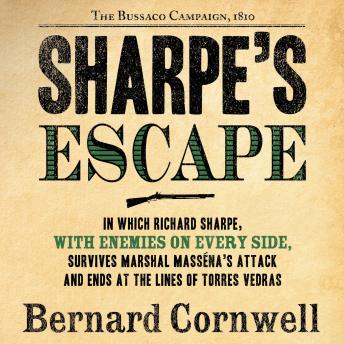 From New York Times bestselling author Bernard Cornwell, the tenth installment in the world-renowned Sharpe series, chronicling the rise of Richard Sharpe, a Private in His Majesty’s Army at the siege of Seringapatam.

Sharpe’s job as Captain of the Light Company is under threat and he has made a new enemy, a Portuguese criminal known as Ferragus. Discarded by his regiment, Sharpe wages a private war against Ferragus – a war fought through the burning, pillaged streets of Coimbra, Portugal’s ancient university city.

Sharpe’s Escape begins on the great, gaunt ridge of Bussaco where a joint British and Portuguese army meets the overwhelming strength of Marshall Massena’s crack troops. It finishes at Torres Vedras where the French hopes of occupying Portugal quickly die.