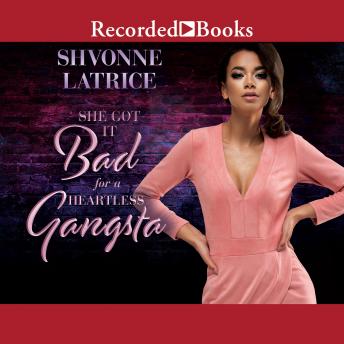 She Got it Bad for a Heartless Gangsta

Ever since Draylah Omari was sixteen years old, it seemed like life had only dealt her a bad hand. Tragedies and betrayal have taken the people she loved most, including her best friend of over a decade, Glory. After finding out her boyfriend Lue, who was once her savior, is nothing but a wolf in sheep's clothing, Draylah decides to lock her heart up and focus only on her half finished brow bar. She's no longer in the mood to weather any storms, especially ones that are brought on by a man. But little does Draylah know, a whirlwind is headed her way, it's named Ricky AK, and she's about to get caught up in it. Ricky AK, a rapper from South Central Los Angeles, is a thoroughbred gangster who just happens to have an impeccable flow. The streets are embedded in his blood, making the sexy young man brash, forward, insensitive, and extremely heartless. When it comes to getting his deserved respect, Ricky AK will put a man, woman, or child in their place with no problem. Brought up by his smooth and no-good grandfather due to his mother being murdered and his grandparents divorcing, Ricky AK learned young that being a woman's knight in shining armor wasn't in his DNA, and he was perfectly content with that. That is until he runs across the beautiful Draylah, who although is smitten with the unfeeling rapper, isn't up for taking his mess ascribed to her past heartbreaks. And even Ricky himself isn't quite ready to feel. In this hood love story dripping with lies, treachery, secrets, and plenty of deceit, will the uncaring rapper from a cold upbringing be able to win over the beautiful but broken woman? Or will Draylah see the disturbingly charming Ricky AK for what he is, early enough to safeguard her heart from yet another fracture? But what's a woman to do when's she's got it so bad for a man that she doesnt even understand it herself?

She Got it Bad for a Heartless Gangsta