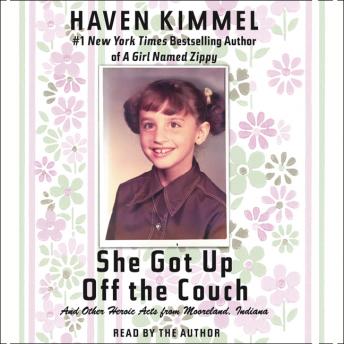 She Got Up Off the Couch

Picking up where A Girl Named Zippy left off, Haven Kimmel crafts a tender portrait of her mother, a modestly heroic woman who took the odds that life gave her and somehow managed to win.

When we last saw Zippy, she was oblivious to the storm that was brewing in her home. Her mother, Delonda, had literally just gotten up off the couch and ridden her rickety bicycle down the road. Her dad was off somewhere, gambling or 'working.' And Zippy was lost in her own fabulous world of exploring the fringes of Moorland, Indiana.

Increasingly frustrated with the limitations of her small-town, married-with-children life, Delonda decides first to learn how to drive a car, even though she won't have access to one. Next, she applies to the local college, eventually graduating with honors at age forty. We happily follow Zippy from one story to another, but we know this is really her mother's book: the poignant tale of a strong woman who found a way to save herself and set a proud example for her daughter.

I loved A Girl Named Zippy so I could not wait to read the sequel. Having come from a small town in Indiana I could totally relate to the book and small town thinking. It is a great story about the strength of women especially when they are moved to be more than they thought they could be. I hope Haven continues to write more books.

I was so excited to find out there was a sequel to Zippy. I was even more tickled after listening to this masterpiece. You can't have a better situation than a biographical book read by the author herself! I can only hope a third book is in the works!

This title is due for release on December 27, 2005
We'll send you an email as soon as it is available!