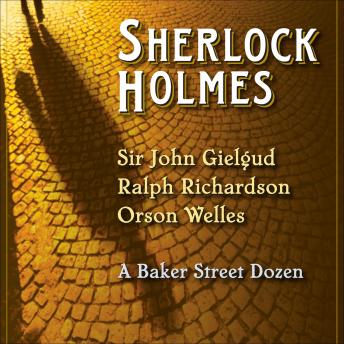 It's elementary that any Conan Doyle fan will want this splendid set of Sherlock Holmes mysteries-twelve timeless classics performed as radio theater, linked by violin music interludes.The great Sir John Gielgud stars as the sleuth of Baker Street, with Ralph Richardson as his venerable companion, Dr. Watson, and Orson Welles as the nefarious Professor Moriarty. With three giants of the theater in such colorful roles, it's no mystery why this collection is so popular.Includes:"The Blue Carbuncle""A Case of Identity""Charles August Milverton""The Dying Detective""The Final Problem""The Golden Pince-Nez""The Norwood Builder""A Scandal in Bohemia""The Second Stain""The Six Napoleons""The Solitary Cyclist""The Speckled Band"

This title is due for release on July 21, 2009
We'll send you an email as soon as it is available!