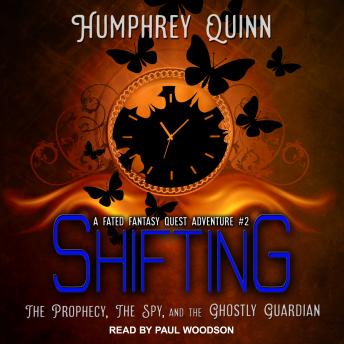 Shifting: The Prophecy, The Spy, and The Ghostly Guardian

#2 of A Fated Fantasy Quest Adventure

In a single terrifying moment, everything changes for telepathic teens Meghan and Colin Jacoby. A light goes out, a doorway closes, and a new nightmare begins. However, amid the darkness they discover that they might not be as alone as they had first thought. Misfortune has landed the twins in a strange world of magic, spies, and ghosts, one of whom claims to be a long-lost relative!

However, once a secret is revealed and a prophecy given, the magical community's levels of acceptance and tolerance is pushed to its peak. And to make matters worse, Colin finds himself in trouble, the kind of trouble only his sister can get him out of . . . except, there's just one problem: if Meghan doesn't succeed, not only might her brother die, but her failure will put the entire magical world into peril.