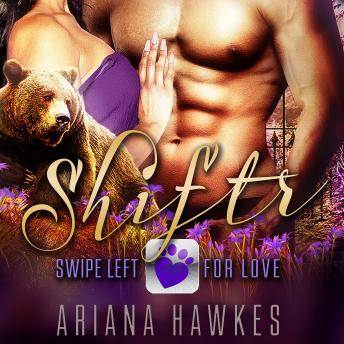 
Sassy, warm-hearted Lauren Garcia doesn't expect to find a husband. Cheated on by her high school sweetheart while raising her three younger siblings alone, she swore off men a long time ago. But she can never resist helping out a friend, and unfortunately, her friend Tamika needs her to test the brand-new dating app she's been working on. Meanwhile, her boss has been making her life hell by forcing her to evict a bunch of guys who've built some cabins on government land. When Lauren meets her first Shiftr match, she's horrified to discover that it's none other than the biggest, brawniest one of these guys. Soon, the wrong kind of sparks start to fly between her and sexy, dark-eyed bear, Connor.


Raised in a broken home with an abusive father, bear shifter Connor has vowed to stay single, believing that his genes are tainted. All he wants is a secure, permanent home for him and his rag-tag clan. He's only on the dating app as a paid beta tester, so what does it matter if the sexy, feisty piece who's been trying to kick him off his own land is supposed to be his perfect match? But when Lauren discovers that her boss is lying about the land, and vows to help the bears, the two of them get close, and somehow his bear can't stop purring for the lusciously curvy, quick-witted human.


While every nerve in Connor's body tells him that Lauren is his, he can't shake his belief that mating her will lead to heartbreak. But when a secret from his past emerges, leaving Lauren feeling like a fool for ever trusting him, will it break them apart, or bring an unexpected solution to the dark legacy that's been blocking both of their hearts?


*** Although this is the 12th book in the best-selling series, it is chronologically the first book in the story. So, if you're new to Hope Valley, this is the best place to start! ***


This is a standalone, full-length audiobook, full of romance, laughs and sexy shifters. HEA and no cheating, of course!