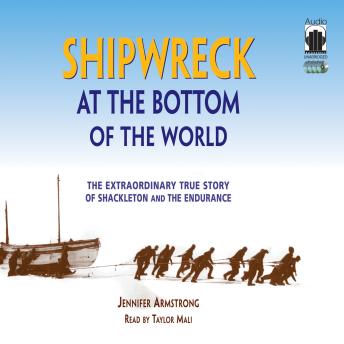 Shipwreck at the Bottom of the World: The Extraordinary True Story of Shackleton and the Endurance

In 1914, Sir Ernest Shackleton and a crew of twenty-seven men sailed from England in an attempt to cross Antarctica from one side to the other. Their ship, Endurance, became icebound and sank, still one hundred miles from land. What follows is one of the most amazing stories of survival ever recorded.

Over the next nineteen months, Shackleton led his men through brutal perils of every kind on ice, land, and sea with one goal-that they all survive. Whether it was a treacherous journey over ice, a storm-racked eight-hundred-mile open-boat journey, or a death-defying trek across a mountain range, Shackleton's mission never wavered: 'But if you're a leader, a fellow that other fellows look to, you've got to keep going.'

The story is enhanced with diary excerpts, explanations of the terrain, wildlife, and navigation techniques, and the Antarctic weather that so affected the outcome of the fateful voyage. And narrator Taylor Mali's dynamic performance transports the listener into the heart of this riveting saga.

Shipwreck at the Bottom of the World: The Extraordinary True Story of Shackleton and the Endurance

This title is due for release on May 23, 2012
We'll send you an email as soon as it is available!