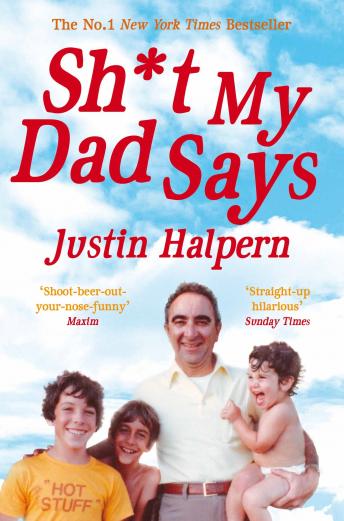 'At 28 years old, I found myself living at home, with my 73-year-old father. As a child, my father never minced words, and when I screwed up, he had a way of cutting right through the bullshit and pointing out exactly why I was being an idiot. When I moved back in I was still, for the most part, an idiot. But this time, I was smart enough to write down all the things he said to me...'
Meet Justin Halpern and his dad. Almost one million people follow Mr Halpern's philosophical musings every day on Twitter, and in this book, his son weaves a brilliantly funny, touching coming-of-age memoir around the best of his sayings. What emerges is a chaotic, hilarious, true portrait of a father and son relationship from a major new comic voice. As Justin says at one point, his dad is 'like Socrates, but angrier, and with worse hair'; and this is the sort of shit he says...
'You know, sometimes it's nice having you around. But now ain't one of those times. Now gimmie the remote, we're not watching this bullshit.'
'Happy Birthday, I didn't get you a present... Oh, mom got you one? Well, that's from me then, too - unless it's shitty.'
'Your brother brought his baby over this morning. He told me it could stand. It couldn't stand for shit. Just sat there. Big let down.'
'The worst thing you can be is a liar . . . Okay, fine, yes, the worst thing you can be is a Nazi, but THEN, number two is liar. Nazi 1, Liar 2.'
'Why the f**k would I want to live to 100? I'm 73 and shit's starting to get boring. By the way, there's no money left when I go, just fyi.'

This title is due for release on June 4, 2010
We'll send you an email as soon as it is available!