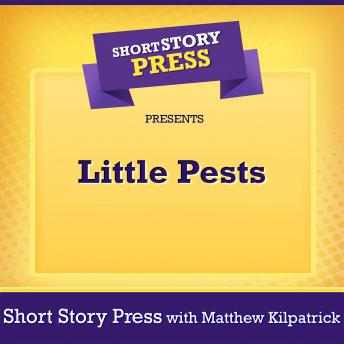 “Little Pests” is a suspense horror story that pits a woman and her young daughter against a suddenly and violently unhinged pest control technician, who has sinister plans for the woman and the girl whose home he is working in. Although he enters their house with no ill intentions, it seems as though the chemicals he works with are affecting his mental state and thought processes. “Little Pests” includes:

• An introduction and complete portrayal of both character sets (the mother and daughter as well as the exterminator),

• A woman who will find out that there are worse things in the world than cockroach infestations,

• A man, understandably concerned about losing his job, coming closer and closer to the brink of madness,

• A terrifying conflict that ensues between Exterminator and the family.

The story starts with horror almost right from the beginning; although with it coming from a very different source than it does later. There isn’t a single moment that isn’t at least slightly tinged with dread, and it’s hard to say who feels it more, the exterminator or the family he terrorizes. Either way, it proves to be a grueling experience for all involved, and the reader gets to watch it all unfold.