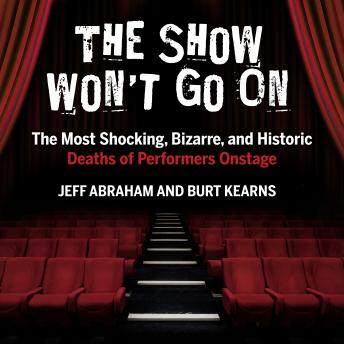 The Show Won't Go On: The Most Shocking, Bizarre, and Historic Deaths of Performers Onstage

There has never been a show business book quite like The Show Won't Go On, the first comprehensive study of a bizarre phenomenon: performers who died onstage. From the comedy magician who dropped dead on live television to the amateur thespian who expired during a play called The Art of Murder, the book is a celebration of lives both famous and obscure, as well as a dramatic and accurate recounting of events leading to the moments they died 'doing what they loved.' The Show Won't Go On covers almost every genre of entertainment, and is full of unearthed anecdotes, exclusive interviews, colorful characters, and ironic twists.

Show Won't Go On: The Most Shocking, Bizarre, and Historic Deaths of Performers Onstage