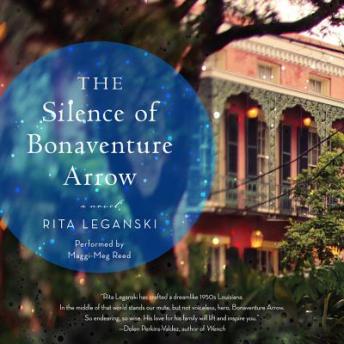 The Silence of Bonaventure Arrow: A Novel

Conceived in love and possibility, Bonaventure Arrow didn’t make a peep when he was born, and the doctor nearly took him for dead. No one knows that Bonaventure’s silence is filled with resonance—a miraculous gift of rarefied hearing that encompasses the Universe of Every Single Sound. Growing up in the big house on Christopher Street in Bayou Cymbaline, Bonaventure can hear flowers grow, a thousand shades of blue, and the miniature tempests that rage inside raindrops. He can also hear the gentle voice of his father, William Arrow, shot dead before Bonaventure was born by a mysterious stranger known only as the Wanderer.

Bonaventure’s remarkable gift of listening promises salvation to the souls who love him: his beautiful young mother, Dancy, haunted by the death of her husband; his Grand-mère Letice, plagued by grief and a long-buried guilt she locks away in a chapel; and his father, William, whose roaming spirit must fix the wreckage of the past. With the help of Trinidad Prefontaine, a Creole housekeeper endowed with her own special gifts, Bonaventure will find the key to long-buried mysteries and soothe a chorus of family secrets clamoring to be healed.

Silence of Bonaventure Arrow: A Novel