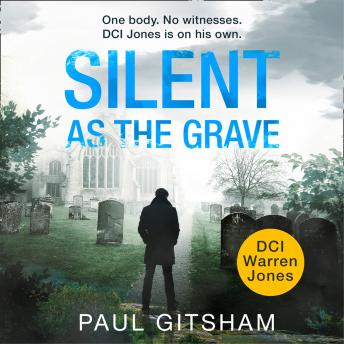 Silent As The Grave


The body of Reginald Williamson had been well concealed under a bush in Middlesbury Common and the murder efficiently carried out - a single stab wound to the chest. Reggie's dog had been killed just as efficiently. With no clues or obvious motive, the case is going nowhere. Then Warren gets a break.

Warren's instincts tell him that the informant is dodgy - a former police officer under investigation. But when Warren hears the incredible story he has to tell, he's glad to have given him a chance to speak. Suddenly, a wide criminal conspiracy, involving high-level police corruption, a gangster and a trained killer, is blown wide open...and Warren finds that this time, it's not just his career under threat, but his family - and his life.


Fans of Peter Robinson and Peter James will love Silent as the Grave, the third novel in Paul Gitsham's DCI Warren Jones series.

Praise for Paul Gitsham:
'A wonderfully classy crime novel. Fluent writing style, great pace to the action. What's not to like? I'll be reading number 2 as quickly as I can download it. Crime Writing at its very best' - Kate Rhodes, author of Crossbones Yard and the Alice Quentin series

Silent As The Grave