Simon Magus: The Life of the Samaritan Who Converted to Christianity and Confronted Peter the Apostle in the 1st Century 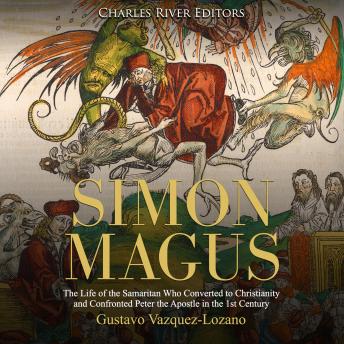 He appears once in the New Testament, mentioned only in passing in the Acts of the Apostles; only a few verses in the canon, but for the primitive Church, there is a whole corpus about Simon Magus, its most formidable antagonist, an enemy of such colossal proportions that he deserved to be called 'the father of all heresies.' His only mention in the Bible occurs at the beginning of the second volume of Luke the Evangelist where he had a minor confrontation with Saint Peter which nonetheless had a happy ending. Simon recants and asks Peter to pray for him. Nothing else about the miracle maker of Samaria who called himself "A Great Power" could penetrate the authorized scriptures. But unlike many other characters who, once the canon was closed, vanished forever, never to be mentioned again by the ancient sources - Pilate being the archetypical example - , Simon Magus survived in the treatises against heresies and popular legend to become the greatest apostate of all times, evil personified, a sorcerer responsible for the greatest corruption in the Church, a kind of demon with powers so spectacular that, according to the apocryphal Passion of Saint Peter and Saint Paul, the joint prayer of the two pillars of Christianity was required in order to defeat him because Simon was surrounded by demons. It was without a doubt the most spectacular exorcism of all time.
That there was a charismatic leader named Simon in Samaria, who was credited with miraculous deeds - contemptuously called 'magic' by his Christian opponents - and that he still had followers as late as the 3rd century, seems a sure fact. Other than that, few certainties can be known. However, in the tales of his spectacular confrontations against Peter, Jesus´s main disciple, in the angry refutation of his teachings by the heresiologists, in the insistence of the sources that he was known as a man of power.

Simon Magus: The Life of the Samaritan Who Converted to Christianity and Confronted Peter the Apostle in the 1st Century