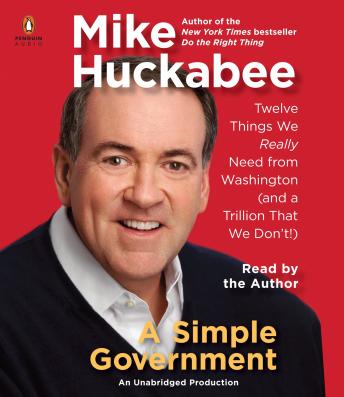 A Simple Government: Twelve Things We Really Need From Washington (and a Trillion That We Don't!)

'We need a simple government. Don't get me wrong; I know that many of the nation's problems are highly complex. But I also know that the governing principles that can solve them, if we work together, are simple.'

Armed with little money but a lot of common sense, former Arkansas Governor Mike Huckabee surprised the nation by coming in second during the 2008 Republican presidential primaries. He connected with millions of voters by calling for a smaller, simpler government that would get out of the way when appropriate. (Unfortunately, there weren't quite enough of those voters to prevent the election of Barack Obama.)

Since then, President Obama's message has morphed from 'hope and change' to 'tax and spend' and 'borrow and spend' and 'over-regulate and spend.' The stimulus failed to stop the recession, the deficit exploded to unimaginable heights, and the Democrats jammed through Congress a financial 'reform' bill that didn't really reform anything and a healthcare monstrosity that gave the government more power over our personal lives than ever.

Meanwhile, Huckabee has continued to be the voice of common sense conservatism, through his television talk show, his radio commentaries, and his lectures around the country. Now he's written a book that sums up the twelve things we really need from Washington to get the country back on the right track.

These twelve essential truths will have you nodding in agreement, whether you're a Republican, an Independent, or even an open-minded Democrat. They can help us put aside our differences, tone down the partisan rancor, and return to the simple principles of the Founding Fathers: liberty, justice, personal freedom, and civic virtue. And they can help us tackle even the most seemingly complicated of today's problems. For instance:

* You can't spend what you don't have; you can't borrow what you can't pay back. Families, businesses, towns, cities, and states all have to balance their budgets or face dire consequences. Why shouldn't the federal government be held to the same standard? And if that means making some hard choices now, it's a far better alternative than saddling our kids and grandkids. * The further you drift from shore, the more likely you are to be lost at sea. The Founders expected the federal government to be subordinate to state and local governments. How can politicians in DC know the best way to help farmers in Iowa, autoworkers in Michigan, or teachers in California? They can't. So every problem should be solved at the most local level capable of solving it.

* Bullies in the playground only understand one thing. There's a time and place for diplomacy, but we can't protect the country just by negotiating with our enemies. We need a strong national defense and a counterterrorism policy that focuses on effectiveness, not political correctness.

* The most important form of government is the family. In the long run, the only way to ensure prosperity, safety, and equal opportunity is to make sure we raise our children to be ethical and productive citizens. No bureaucracy can replace parents in that essential role, so we have to do everything possible to help parents do their job.

A Simple Government will inspire any American looking forward to a better future.

Simple Government: Twelve Things We Really Need From Washington (and a Trillion That We Don't!)