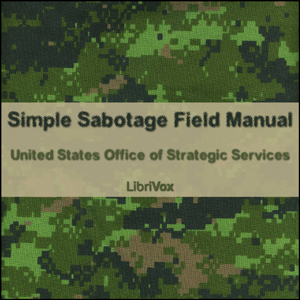 Formed during World War II, the United States Office of Strategic Services (OSS), was organized for special operations and intelligence gathering and analysis. Included in its mission was the implementation of, and training of foreign forces in, propaganda, espionage, subVersion, and sabotage. After the war, OSS functions were transferred to the newly formed Central Intelligence Agency (CIA).

This "Simple Sabotage Field Manual" was used by OSS agents in training "citizen-saboteurs" in methods for inciting and executing simple sabotage to thwart industry and other vital functions in Axis-occupied areas. (Summary by James Christopher)