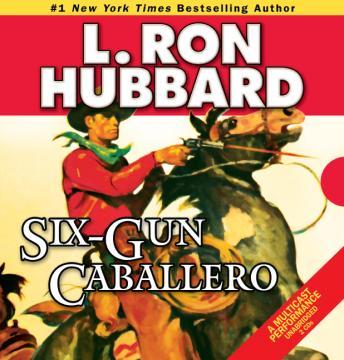 He’s handsome. He’s charming. He’s a total gentleman . . . and he’s totally outgunned and outnumbered. He’s Michael Patrick Obañon - a role that has Antonio Banderas written all over it.

Obañon’s lost his inheritance - a 100,000-acre New Mexico spread - and he could lose his life if he’s not careful. A ruthless band of renegades have seized his land, and he’s determined to get it back.. Obañon’s got one secret weapon: his fierce intelligence. He can’t outshoot the outlaws, so he’ll have to find a way to outwit them. . . .

Part Irish, part Mexican, Michael Patrick Obañon is as American as they come - crafty, confident, and cool under fire. It may be one man against the world, but before he’s done the world will know how the West will be won.

In the 1930s a radio program, Writers and Readers, hosted by Bob de Haven, delivered news of the hottest authors of the day - interviewing the writers behind the stories. Here’s how he promoted an upcoming broadcast with L. Ron Hubbard: "He has placed in print a million and a half words. He is a quantity producer, well paid and in constant demand. He has outlined some valuable information on his lead novelette . . . Six-Gun Caballero." It is an introduction to Hubbard that is as pertinent now as it was then.

"This portrait of the West is rendered in a rich soundscape of clapping hooves, thundering guns, and Spanish guitar interludes." --AudioFile

This title is due for release on June 17, 2009
We'll send you an email as soon as it is available!