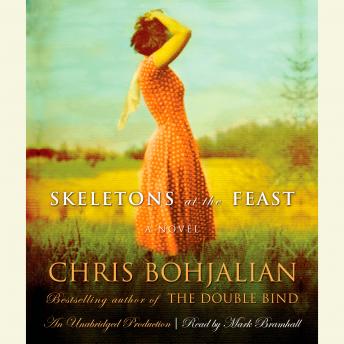 Skeletons at the Feast

In January 1945, in the waning months of World War II, a small group of people begin the longest journey of their lives: an attempt to cross the remnants of the Third Reich, from Warsaw to the Rhine if necessary, to reach the British and American lines.

Among the group is eighteen-year-old Anna Emmerich, the daughter of Prussian aristocrats. There is her lover, Callum Finella, a twenty-year-old Scottish prisoner of war who was brought from the stalag to her family’s farm as forced labor. And there is a twenty-six-year-old Wehrmacht corporal, who the pair know as Manfred–who is, in reality, Uri Singer, a Jew from Germany who managed to escape a train bound for Auschwitz.

As they work their way west, they encounter a countryside ravaged by war. Their flight will test both Anna’s and Callum’s love, as well as their friendship with Manfred–assuming any of them even survive.

Perhaps not since The English Patient has a novel so deftly captured both the power and poignancy of romance and the terror and tragedy of war. Skillfully portraying the flesh and blood of history, Chris Bohjalian has crafted a rich tapestry that puts a face on one of the twentieth century’s greatest tragedies–while creating, perhaps, a masterpiece that will haunt readers for generations.

Relates a part of World War II history that I was certainly unfamiliar with, the effect of the war's end on ordinary German families far from the cities and the Nazi influence. The story follows the refugees who fled Germany when it was falling apart, and their voyage is filled with terror and loss. Two parallel stories describe a young Jewish man who escaped a train headed to a concentration camp and women liberated from the camps. The story occasionally bogs down in slowness, but is mostly gripping. The narrator does a good job voicing the different characters. A great choice if you enjoy historical fiction.

I thought I had learned or heard about all of the atrocities committed by Hitler and the Nazis in World War II. This book not only reminds one of the INSANE treatment and exterminations of human beings, but also tells the story of a normal, non-Jewish, German family. It's a side that I have often wondered about. How could regular German citizens ever have let this happen? How could they have followed and believed so blindly in Hitler?