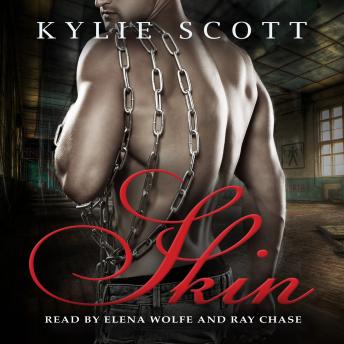 From romance master Kylie Scott comes Skin, the second installment in the sizzling Flesh series. Who knew an apocalypse could be so sexy?


Six months since the zombie plague struck, former librarian Roslyn Stewart has been holed up in a school with eight other survivors. But now the shelves in the school canteen are bare. The stranger at the gate has supplies that will ensure the group's ongoing survival but at a cost. He wants a woman.


Nick is a man with a plan. He'll treat Roslyn like a queen, devoting the rest of his life to protecting and providing for her. In exchange, of course, for sexual favors. It's the deal of the century given the state of the world. But Roslyn doesn't see it that way. The first chance she gets, she attacks the ex-army man and attempts to escape, forcing Nick to contain her. And so begins his awkward courtship of the woman, with her chained to the bed for security reasons.


Chained like a dog and forced to spend her every waking moment with a creep, albeit a good-looking one, Ros is determined to escape. When circumstances force them to band together against a common enemy, their very survival depends on their ability to learn to trust each other. An uneasy partnership develops, but can a relationship with such a difficult beginning ever have a future?


The hotly anticipated sequel to Flesh, Skin is set in the same universe with a different set of characters.