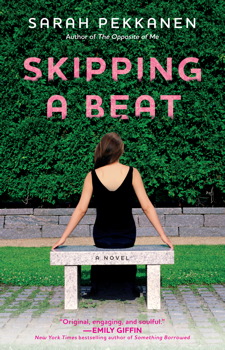 Skipping a Beat: A Novel

From the author of the acclaimed The Opposite of Me, a poignant, witty novel about marriage, forgiveness, and the choices that give shape—and limits—to our lives.

What would you do if your husband suddenly wanted to rewrite all of the rules of your relationship?  This is the question at the heart of Skipping a Beat, Pekkanen’s thought-provoking second book.

From the outside, Julia and Michael seem to have it all.  Both products of difficult childhoods in rural West Virginia – where they were simply Julie and Mike – they become high school sweethearts and fall in love.  Shortly after graduation, they flee their small town to start afresh.  Now thirty-somethings, they are living a rarified life in their multi-million-dollar, Washington D.C. home. Julia is a highly sought-after party planner, while Michael has just sold his wildly successful flavored water company for $70 million.

But one day, Michael collapses in his office. Four minutes and eight seconds after his cardiac arrest, a portable defibrillator jump-starts his heart. But in those lost minutes he becomes a different man. Money is meaningless to him - and he wants to give it all away. Julia, who sees bits of her life reflected in scenes from the world’s great operas, is now facing with a choice she never anticipated. Should she should walk away from the man she once adored – but who truthfully became a stranger to her long before this pronouncement - or give in to her husband's pleas for a second chance and a promise of a poorer but happier life?

As wry and engaging as her debut, but with quiet depth and newfound maturity, Skipping a Beat is an unforgettable portrait of a marriage whose glamorous surface belies the complications and betrayals beneath.

Skipping a Beat: A Novel

This title is due for release on December 17, 2013
We'll send you an email as soon as it is available!