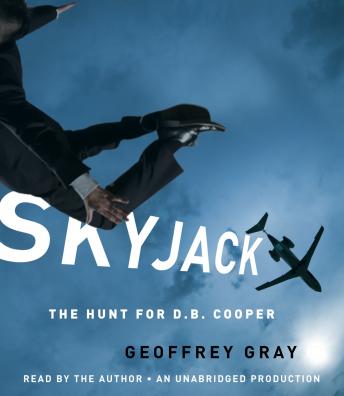 SKYJACK: The Hunt for D. B. Cooper

“I have a bomb here and I would like you to sit by me.”

That was the note handed to a stewardess by a mild-mannered passenger on a Northwest Orient flight in 1971. It was the start of one of the most astonishing whodunits in the history of American true crime: how one man extorted $200,000 from an airline, then parachuted into the wilds of the Pacific Northwest and into oblivion. D. B. Cooper’s case has become the stuff of legend and obsessed and cursed his pursuers with everything from bankruptcy to suicidal despair. Now with SKYJACK, journalist Geoffrey Gray delves into this unsolved mystery uncovering new leads in the infamous case.

Starting with a tip from a private investigator into a promising suspect (a Cooper lookalike, Northwest employee, and trained paratrooper), Gray is propelled into the murky depths of a decades-old mystery, conducting new interviews and obtaining a first-ever look at Cooper’s FBI file. Beginning with a heartstopping and unprecedented recreation of the crime itself, from cabin to cockpit to tower, and uncanny portraits of characters who either chased Cooper or might have committed the crime, including Ralph Himmelsbach, the most dogged of FBI agents, who watched with horror as a criminal became a counter-culture folk hero who supposedly shafted the system…Karl Fleming, a respected reporter whose career was destroyed by a Cooper scoop that was a scam…and Barbara (nee Bobby) Dayton, a transgendered pilot who insisted she was Cooper herself.

With explosive new information and exclusive access to FBI files and forensic evidence, SKYJACK reopens one of the great cold cases of the 20th century.

SKYJACK: The Hunt for D. B. Cooper